Thoughts From the Freeway 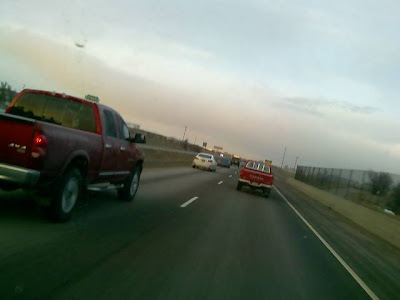 The left-most lane on a freeway is the “pass” lane. It’s not the “Sunday drive” lane. If you’re in it, you should be passing someone. If you’re not, get the hell out of the way.

I don’t know how many times I’ve seen people weaving around traffic at high-speed… just to end up right in front of me at the exit stop light. Way to save time there, jackass!

When you’re merging onto the freeway, YOU need to yield. If people move over to let you on, that sure is nice of them. If not, slow down or speed up to stay out of their way. Don’t just casually slide over, expecting everyone to clear a hole for you. Especially when it’s a big truck you’re merging into.

Speaking of big trucks, give those guys a break. It’s a good bet they’re a better driver than you are. It’s also a good bet that in a collision, you will lose. Give ‘em some space and respect. I see them do it all the time.

When I see a car plastered with religious bumper stickers, I don’t think “Wow. What a dedicated Christian!” I usually think about WJWD (What Jesus Wouldn’t Do). If Jesus had a car, I highly doubt it would have any cheesy bumper stickers on it.

If you STILL smoke in the car with your kids, you’re a lazy, selfish moron. That, more than anything, puts visions of road rage in my head.

If you and another car pull up to a four-way stop at the same time, the person on the RIGHT is supposed to go. If you are the person on the right, don’t confuse everything by waving the other person on. Know that you have the right-of-way, and commit. (This has nothing to do with the freeway, but I had to throw it in cause it drives me insane).

One of my favorite things to do on the freeway is to randomly wave at people. At first, they look at you intently to see if they recognize you (they wouldn’t want to wave to someone they don’t know!) More times than not, they just ignore you. Kinda sad, I think.
Posted by otisgexperience at 12:28 PM

That's a big AMEN! to all freeway thoughts. I'd like to add...use your freakin' turn signal. It's not hard to do and makes your intentions clear to the people around you.

i have noticed that people seem to assume that someone else is going to watch out.

I see it all the time, mainly in parking lots.

Are YOU one of those Kootenai County big 4-wheel drive pick ups that tailgate me in the left lane? you drive way too fast! much too fast....

And I more than a little cheesed at you; I waved back! didn't you see me?!