Saga of a Broken Leg

When I was younger, I told myself that I'd skateboard forever. It stemmed from a fear of growing up; as if stepping off that skateboard would mean I was suddenly old. I made a pact with myself that I would continue doing it as long as I was physically capable. One day, I found myself in my mid 30's. My skateboarding days were long gone, and I actually felt a little guilty, like I had cheaped out.

Last November, I decided to go see my buddy Brent in Nashville, Tennessee. He'd ventured to North Idaho many times; one visit even lasted a few years. But, nobody had returned the favor by going down there, so I figured it was time. It turned out to be a great trip, complete with civil war battlefield visits, a night in downtown Nashville, and even a leisurely drive across the beautiful Tennessee countryside. The night before I was due to fly back home, Brent asked if I'd like to check out the Nashville skatepark.

It was time to revisit that childhood promise I had made with myself.

I wasn't any good anymore, but hell... I could do it, and I was having a great time. We skated until the park was due to close in a few minutes. I was determined to stick that 50-50 grind... a trick that was so easy when I was younger. I went for that infamous "last try"...

I'm still not sure why, but my board flipped out from under me. When I hit the transition, I felt something slide in my knee. As I lay there assessing the situation, Brent asked what I thought was wrong. At that point, all I knew was that it felt really weird... and my foot was pointing in the wrong direction.

"I think my knee came out of joint. Maybe I can twist it back."

"Dude... if you can get yourself out of this pool, then I could get you to the hospital... and you won't have to pay for an ambulance."

I was immediately feeling the weight of hospital bills. Skipping the ambulance sounded good, so I did probably the worst possible thing - and tried twisting my leg back into joint. After feeling a couple snap crackle pops, I decided that probably wasn't a good idea. "I'm not going to make it out. Call 911." 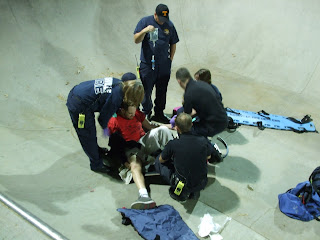 After what seemed like an eternity, Nashville's finest was on the scene. I was immediately given some morphine (not nearly enough), and strapped to a gurney. It took some effort getting me out, since I was in the bottom of a pool. They even enlisted the help of some straggler skateboarders to help push me out. They slid me into an ambulance, gave me some more morphine, and headed for Summit Medical Center. On the way, all I could think about was how much morphine I'd had, how much my leg still hurt, and hoped that all those shot-up Vietnam vets back in the day had received a way bigger dose than I had.

"Isn't this stuff supposed to make the pain go away?" I asked the emergency tech.

"No," he replied. "It just makes you not care that it hurts."

We made it to the hospital. They immediately took some x-rays, and stuck a needle in my leg to drain all the fluid that was accumulating. I didn't care at this point, as the drugs had finally kicked in. The resulting x-ray didn't look good. 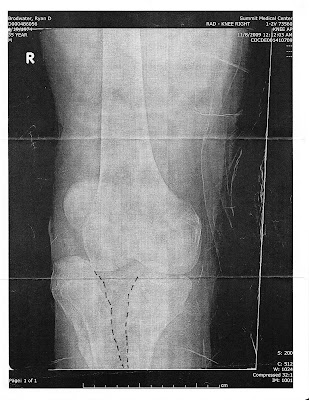 Before saying anything to me, the ER doctor high-fived some other dude, and said, "I knew it! A tibial plateau fracture!" which really meant nothing to me at the time. Apparently, my femur (thigh bone) had pile-drived into my tibia (shin bone) and completely blown my knee apart. Even worse, it had split the tibia like firewood... from my knee to about halfway down my shin. The dark space in the x-ray (outlined by the dashed line) isn't supposed to be there. By this time, it was around midnight. They called a surgeon, and he said that he'd be there in the morning. I was carted to a room, where I immediately called Mavis.

"I broke my leg tonight. Skateboarding."

"Oh. Well, I just got back from a debate tournament."

"I guess I'm having surgery in the morning. I gotta go." 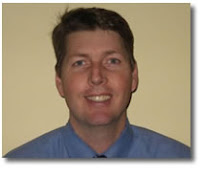 Suddenly, it was morning, and the surgeon had come in. His name was Dr. Cook, and he had a very calming, pleasant demeanor. Honestly, I really have no idea what he said to me, other than I was going in for surgery. All I knew is that I trusted him. They put me out, and after a day-long surgery I woke up back in the room to find Mavis sitting there looking at me. It was almost like she had teleported down there. Dr. Cook came in, and said the surgery went well. I asked for some pictures (kinda hoping for some gory shots of my leg cut open), but instead he brought in the x-ray of my new leg. 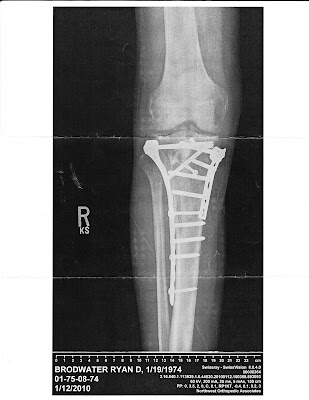 It took 2 plates and 15 screws to put me back together again. I immediately felt a little strange, knowing I had a pile of foreign metal objects in my leg. Soon after, the bandages came off and I got my first look at Frankenleg. 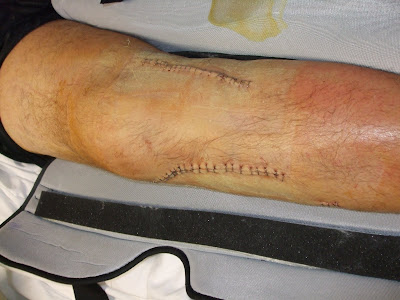 I had two huge incisions, around 50 staples, and a gigantic swollen foot that looked a bit like a haggis sausage. I knew I was in for some good times. To make an already long story shorter, I'll sum up my week stay in the hospital: 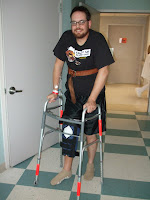 Having to use a walker instantly makes you feel about 80 years old.

I really don't understand why people steal Oxycontin. I woke up feeling like I had bugs crawling all over me, and saw creepy apparitions all over the place.

Percocet, on the other hand, was a little too wonderful. Mavis did a great job intervening, and I felt like I'd been to rehab about 27 times.

I had one physical therapist who was really pushy about me getting out of bed, and I couldn't do it. I got another one who made me feel like I could do it, and I got right up. Big difference.

I'm not sure how anyone could survive in a hospital room without a loved one. Mavis made all the difference, and guided me through figuring out how to get around (and... uh... do other things!) all over again.

After my extra week of... vacation?... it was time to figure out how to get me home. Remember that movie "Planes, Trains, and Automobiles"? Imagine John Candy's character... only with a broken leg, and that's kinda how it went. We crammed my broken self into a rental car, airport shuttle bus, taxi, train station, and finally into an Amtrak sleeper car. A couple days and several pain pills later, we finally made it home.

A few days after that, I was back at work, lucky to have a desk job.

Around 2 months later, I was down to using a cane.

At 3 months, I started walking on my own, and was able to go to the gym again. 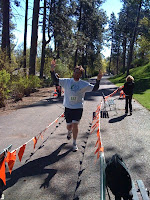 At 5 months, I walked and finished a 3 mile fun run.

Now, I'm approaching 6 months of recovery time. Last weekend, I went on a whitewater rafting trip I do every year and didn't have any problems. I still can't run (or even jog) at this point, but I do feel like I'm easing back into the things I was able to do before.

So... I guess it's time I accept the fact that somehow along the line, I got a little older. But, at least I can now confidently say...

Posted by otisgexperience at 8:21 PM 3 comments: