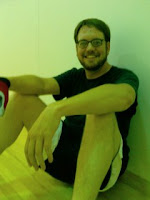 I've never been much of an athlete.

As a youngen, my parents signed me up for t-ball. My first time at bat, I hit the ball... and ran to the pitcher's mound. Then to 2nd base. Then to 1st, across to 3rd... and then home.

A couple games later, I really had to pee... but the restrooms were locked. While playing right field, I couldn't hold it any longer and soaked my pants. After the last out, I ran to the dugout and desperately said "Coach! A sprinkler turned on, and got my pants all wet!" He looked me over and said, "Whatever. You peed your pants!" I sat out the rest of the game in the dugout, wishing I wasn't such a wimp. I only played one season.

In flag football, I got the ball for the first time... and ran to the wrong endzone. I wished I wasn't such a wimp, and only played one season.

In middle school gym class, I was usually the last one picked for dodgeball teams. I was tall, lanky, and not exactly aggressive. I was always terrified of getting hit in the face. So, of course, it happened. I woke up flat on my back, with my glasses nowhere in sight. The gym teacher whisked me off to safety, while looking bewildered at how someone could be such a wimp.

In high school, I played the tuba in band. The closest I got to a sporting event was playing the school fight song in the bleachers. I'd watch the guys playing football and/or basketball, the girls oogling over them, and wished so badly I could be them... instead of a wimp.

After graduating, I joined the Marines. I was 6'4" tall, and weighed 143 pounds. Underweight, as it turned out. I was put on "double rations" to bulk up, which meant I had to eat twice as much as everyone else. Of course, this put me in great graces with the fat kids who had to eat cottage cheese... for every meal. One night, while standing in our underwear for hygiene check, the Drill Instructor looked me over. He paused a moment with a confused look on his face, and belted "What the hell, Recruit? What did you think this was... the Peace Corps?!?" I was probably one the few wimps to successfully become a United States Marine, and I was proud.

Recently, Mavis signed us up at a health club. She wanted me 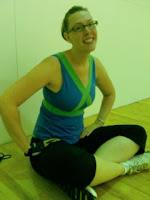 to play racquetball with her, clueless to the fact that I would in no way challenge her. Mavis is very athletic, and plays a lot of tennis and basketball. I reluctantly agreed... being a little weary of her finding out what a wimp I am. At first, she went very easy on me (without me knowing) so I wouldn't get overly frustrated. Eventually, I even "won" a couple matches. Over time, I found myself improving to the point that she was actually getting a workout. I really started feeling confident when I could finally return her "signature" serve, that she masterfully hits into the corner right where I can't get it:


Last week, a miracle happened. We hit the court after not having played for awhile, because Mavis was in Arizona visiting her Dad.

I squarely beat her 4 out of 5 matches. I never thought it would be possible, and for the first time I kinda felt like...

I needed my own signature move, and quick. This is all I could come up with.

I still think she's probably holding back a bit. But as long as I win once in awhile, I don't mind.

In the "serve" video, you'll notice how I politely ask her to "not hit me". Some things never change. :)
Posted by otisgexperience at 12:31 PM No comments:

I came home to find this flyer tucked in my front door: 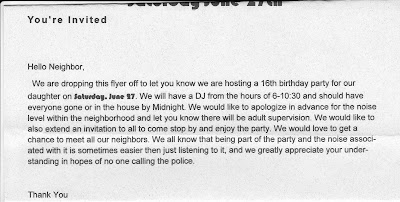 Holy crap! This is the sort of thing neighbors did back in the... like... 1950's! I hope they have a great party, and as far as I'm concerned... if anybody DOES call the cops, THEY'RE the obnoxious ones. :)
Posted by otisgexperience at 10:53 PM No comments:

Hiawatha Trail, Back in Action

Anybody who knows me knows that I have many varied and somewhat eccentric interests.

Occasionally, they slam into each other. 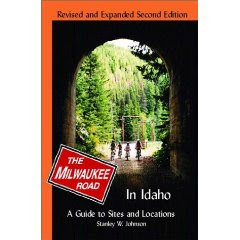 Everytime I drive up the St. Joe River from St. Maries, I try to find hints of the old Milwaukee Road roadbed. A couple weeks ago, I came across this book in the Avery fly fishing shop. It's a guidebook on where to find old Milwaukee Road roadbeds throughout Idaho. Part of this route is now the Hiawatha bike trail, that many know of as an extremely popular all-purpose recreation trail on the Idaho/Montana border. I've ridden it a few times now, and I was initially amazed by the fact that anyone had the gumption to build a railroad there in the first place. Now, it's amazing to me how something so spectacular could suddenly cease to exist... almost to the point of oblivion. This book was an incredible find to me; it not only describes how and why the railroad was built... but describes how to get to everything that's left. Amazing.

Of course, the more I read into the Milwaukee Road... the more I wonder what it was actually like seeing trains carve through the Bitterroots. Today, out of nowhere, I stumbled across this video on YouTube. Some german guy made a computer simulation of a Milwaukee Road train traveling between Avery and St. Paul Pass. It's set to electronic music, of course... those germans just gotta have it. Anyone who's ridden the Hiawatha bike trail will recognize the terrain; I think it's incredibly accurate.


And as if that isn't cool enough, he's also made a version showing the Northern Pacific's route over Lookout Pass. I've always wondered whether or not a railroad went over that pass... and if it did, exactly how. Here it is! I think it's especially interesting at 3:28, where it's traveling through Taft, MT (where you get off I-90 to access the Hiawatha Trail). Up in the distance, you can see the Milwaukee Road roadbed veering into the mountains towards St. Paul Pass. Cool.

Railroad modeling, the St. Joe River, and techno music. Who knew? :) That "german guy" has a MySpace page, with even more virtual tours of the Milwaukee Road and other stuff.
Posted by otisgexperience at 12:41 PM 2 comments: 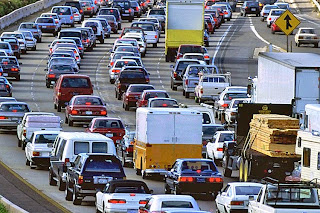 No need to memorize; it happens automatically.

Craving Chaos, In Search of Silence

The radio in my beater commuter car sucks.

I'll be cruising down the highway, singing along with a song, when wham!... it goes dead like it was thrown in a bathtub. It's always temporary, sometimes it comes back on later that day... sometimes it takes a couple days.

I live in Post Falls, my kids go to school in Spirit Lake, and I work in the Spokane Valley. Four times a month I pickup/drop off my kids in Spirit Lake, which ends up being about an hour and a half commute each time. That doesn't include any additional trips to attend baseball games, dance recitals, and everything else parents want to be a part of.

As a result, I do a lot of driving. When my radio first started crapping out, it drove me insane to drive in silence. It felt very disconcerting. Over time, however, I realized what was starting to happen: I was forced to think about things. Sometimes, I'd even find myself talking out loud... as if I was discussing the things I was thinking about, with the person whom it was regarding.

Every time I caught myself doing it, I immediately stopped. In our society, when we think of people talking to themselves, we instantly view them as crazy. I'm fairly confident that I'm not crazy, and even if I am... I don't care. It was highly therapeutic, and helped me work out a lot of stress that I was going through. We all know that writing thoughts down can help get it out of our head... so why wouldn't saying it out loud have the same effect?

It did for me.

All of this brings me to a thought on basic human behavior: Everyday, we are surrounded by chaos. Hectic work places. Busy schedules. Negative news. And... we all hate it. About the only thing that gets us through is the idea that someday, somehow, we'll find a way to "get away from it all". Spend an afternoon at the ocean, hike to a secluded mountain lake, or hang out in the backyard for a lazy weekend.

So... if peace and quiet is what we're longing for... then why do we surround ourselves with chaos? We even do it when we have the occasional opportunity for peace. Many people leave their TV on all the time, for the noise. We crank the music in our cars, to keep our brains occupied. We schedule out every spare second of our lives.

Why? To keep from actually thinking about, or dealing with anything?

We surround ourselves in chaos, while searching for silence.

Now, I find myself enjoying my peaceful commutes. I've also found that with the radio off, I'm more apt to have conversations with whoever is in the car. Something else people tend to try and avoid.

Who Needs the Month of May?

I just realized I didn't post a single thing in May. Oops. I've got a lot of stuff coming up, bear with me... including some new tunes from the latest 40 ounce J lineup. Wait till you hear Mavis sing our punk rock version of the song "Angel of the Morning"...
Posted by otisgexperience at 4:45 PM No comments: