I was missing my kids last night, so I gave them a call. My 7 year-old son got on, and was very excited to tell me something.

"Guess what, Dad? I get to be student of the week at school!"

"Wow, that's cool, guy. Did you do something special to earn that?"

"No, the teacher picked my name out of a hat. I get to pick two other kids to have lunch with me in the classroom next week!"

"That'll be fun! Are you going to pick your friend (so-and-so)?"

"I see. Who are you going to pick then?"

"Well, I've never heard you talk about them before. Are they your friends?"

"Oh. Then why are you picking them?"

"Because they never get picked by anyone else."


I really can't imagine anything that he could say or do that would make me more proud. :) 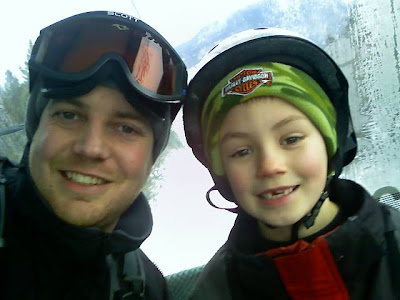 Posted by otisgexperience at 7:45 AM 5 comments:

Just Call Me the "Teach" 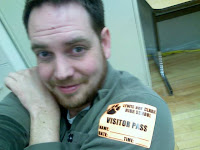 You never know where I may turn up.

My girl, Mavis, is a teacher at Lewis & Clark High School in downtown Spokane. She teaches English, video production, and produces the school news program. They had been using Pinnacle software for video editing, but recently switched over to Adobe Premiere. Mavis wasn’t exactly Premiere savvy, but coincidentally… it’s the same software I use to edit all of my video. She asked if I’d be interested in being a guest teacher for a day, and talk to the students about the basics of using Premiere.

Actually, I was kinda excited about it. I hadn’t really stepped foot in a high school since… well… high school.

I reported to the office of the school, and let them know that I was there to be a guest speaker for Mavis. They seemed a little suspicious of me, probably due to the fact that I was holding a huge vase of flowers (it was Valentine’s day, and I was multi-tasking.) Regardless, I got my Visitor Pass, and found my way to the classroom. Mavis seemed a little surprised that I actually showed up. I think she figured I’d chicken out. Maybe she was surprised by the flowers. She probably figured I’d chicken out.

We wandered the halls a bit, and shot some footage to use for the classes. It was lunchtime, and there were kids sprawled out everywhere… talking on their phones, texting, and listening to iPods. You know, important skills to learn as a youngster, to use as an adult in grocery store checkout lines. It felt a little odd to be randomly videotaping, but Mavis assured me it was perfectly normal. I guess being under constant surveillance is something else kids get used to at an early age these days. 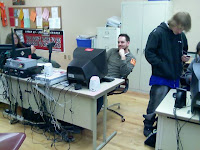 Back in the classroom, Mavis got me setup on the “teacher” computer. Students started filing in, and didn’t seem overly surprised that I was there. I watched as one kid tried to mutilate his iPod headphones in the paper chopper.  Mavis was too busy arguing with another kid about his crappy grade to notice.

The bell-replicating device rang, and class started. Mavis introduced me, and I was feeling confident… until a girl chimed out “is he your BOYFRIEND?!?” Mavis reluctantly said yes, and the entire class resounded “Awwww…. “ A girl in the front row remarked “You’re such a cute couple!” I was a little nervous about where this discussion might lead, so I quickly changed the subject. “Okay, go ahead and turn on your computers, and start up Adobe Premiere.”

For three classes, I exposed several kids to an hours’ worth of the Otis G Experience. After the last student bailed out of the classroom, Mavis assured me that I did a great job.

Of course, that’s what you say to your boyfriend… whether they did or not. I think I did okay, but I can tell you one thing that’s for certain…

Teachers are incredibly underpaid. I was seriously exhausted after doing only three classes. It takes a lot of energy to hold the attention of a room full of teenagers.

The only awkward moment: I was showing the kids how to make a music video, and one of them requested a song that I just happened to have. I grabbed some random footage to go with it, and hit play. The song went “let the bodies hit the floor”… over a shot of all the teachers eating lunch.

Yeah. Not too cool. But entirely unintentional. 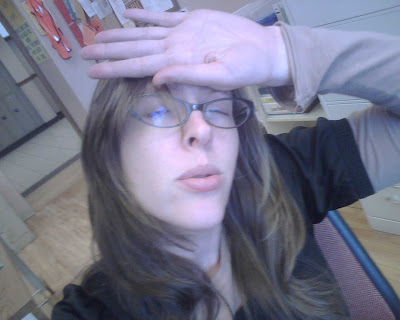 Mavis, after realizing we made it through the day... and that I won't be in a classroom again anytime soon.

Posted by otisgexperience at 9:43 PM No comments: