My Own Personal Elvis 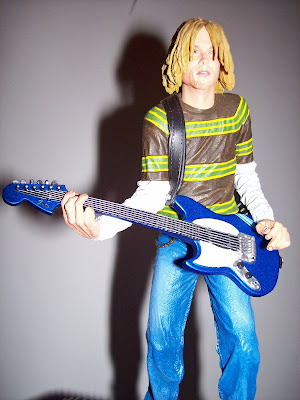 When Nirvana first came out, it was a huge deal for me. I went through most of my teen years listening to my brother's buttrock music. It consisted of Quiet Riot, Ratt, and various other big hair, exposed chest, tight leather pants bands. I liked the heavy guitar, but I always thought the singing was weird and the lyrics too cheesy.
"Smells Like Teen Spirit", Nirvana's breakout single, grabbed me like nothing else before. Here was some freakishly skinny dude, wailing on a guitar who didn't seem to care if he made mistakes or not. Yup. Pretty much where I was at in life at the time. 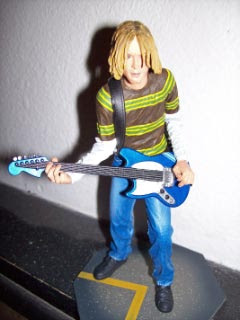 Kurt Cobain was really nobody special. He never wanted to be a big deal. He was just a loner from Aberdeen who had something to say, and the world embraced him. A little too hard, it turned out. Kurt ended up shooting himself in his garage.
He left a note, the text of which is here, and a picture of here. I'll never forget his famous last words, "It's better to burn out than to fade away."
I found this little action figure of Kurt at Spencer's Gifts in the Spokane Valley mall recently. It's a pretty good likeness, and even included a chunk of the gym floor from the "Smells Like Teen Spirit" music video. It was not prominently displayed. In fact, it was clearance priced for $5.98 (marked down from 20-something dollars). I wondered what Kurt would think about being clearance priced, in a shopping mall novelty store.
Would that be considered "burning out", or "fading away"?
Peace out, Kurt.
Posted by otisgexperience at 8:34 AM

I remember exactly where I was and who I was with when I heard Smells Like Teen SPirit for the first time.

I stopped my conversation and said "what the heck is that???"

The unplugged concert is probably the finest musical performance I have ever seen or heard.

I'm too young to remember when Nirvana first got popular. I was around, but I know I wasn't into popular music. I do know that Cobain gets an entry in college level Music History courses and text books. That says something I think.

I can't really speak intelligently about Kurt Cobain or Nirvana; I grew up on a whole different style of rock music in the '60s and '70. It's a shame, though, when any musician does what Kurt did. If only he'd 'counted to ten' and maybe just took some time away from the scene, he'd still be around making music today. Neil Young, on his "sleeps with angels" wrote a touching song which referred to Kurt...in which Neil advised anyone else who's thot about suicide to "change your mind". But yet I know how ya feel, because musical idols of mine have ended their own lives. It's sad.

Although I don't know a lot about Nirvana, I found a copy of "Nevermind" on cassette several years ago, and when I heard it, I thought it was harsh and depressing; it wasn't happy or hopeful music at all. I think if a person wallows too long in their grief, things get all out of proportion and then they end up as just another suicide case. I think that's why a lot of people don't commit suicide. They have hope. Which, obviously, Kurt didn't have. And that's sad, too.