Not the Prettiest Drag Queen

Some of my buddies at work had something special planned for an upcoming Mardi Gras fundraiser. Someone had bailed out on the deal, so I was asked if I was interested in helping out. As always, I threw myself onto the wagon.

The first sign of trouble was when my daughter wondered why her Daddy would be looking for a dress at Value Village. She kept peeking under the dressing room door, with a giggly confusion. I also found it's pretty hard to find size 12 high heels, and ended up settling on some chunky brown sandals.

At the big event, I decided to give it my all. I would be dancing to "If I Could Turn Back Time", by Cher. I wanted to be sexy and sultry.

I ended up looking boxy, clumsy, and masculine. I never realized how broad my shoulders are, until I saw myself in an evening gown.

I guess I don't make a very sexy girl. But I've also been told that's not necessarily a bad thing. I may not be the prettiest drag queen... but I apparently got the "sympathy vote" from someone. While changing backstage, I realized somebody had stuck a $20 bill in my cleavage. :)

If you don't want to watch the whole thing, check it out at 3:10, and the ending. Regulars here will also recognize another otisGexperience guest appearance by my cubicle neighbor, O'Malley (he got the "cutest" vote). And all the others? Let's just say they're mostly government employees from the greater Spokane area.

Posted by otisgexperience at 7:31 PM 2 comments:

This last Christmas, I received a very thoughtful present. It's the book "Singles, Six Decades of Hot Hits & Classic Cuts", by Johnny Black. It's basically an overview of all the music singles that topped the charts for the last 50 years. It's fun for me to, for example, look up 1962 and see what music was popular during that year. Since popular music somewhat reflects the sentiment of the period, I think it's one of the best ways to get a feel for the era... without having lived it. Obviously, most of the songs from before the 70's I've never heard of, so it's fun to get on Google or YouTube and look 'em up. It's amazing to me that some of the songs were even hits.

While reading it last night, I came across a full page spread for "Telstar", by the Tornadoes. It was the first British instrumental single to top the charts in America, so I figured it would be an amazing song. Here's the Tornadoes performing it:

Okay, first impressions: Weird song. Somewhat catchy melody, but doesn't exactly seem "mass-media" exciting to me. What interested me much more than the song, was the story on the facing page... about the guy who wrote it.

Joe Meek. (Check him out on Wikipedia here.) Talk about a weird, but fascinating guy. The dude didn't even play any instruments, but wrote hundreds of singles... many of which were chart toppers. He was a closet homosexual ( since it was illegal in Britain at the time), and pioneered many advances in recording techniques. He was also convinced that he could speak with dead rock stars (like Buddy Holly), and would set up recording devices in cemetaries to try and capture voices. It all ended in 1967 when he shot his landlady, and then shot himself... at the age of 37. Apparently, I'm not the only one who finds him interesting, as his life is currently being made into a film. I'll definitely be checking that one out.

While searching "Telstar" on YouTube, I came across this cute little montage video that "joltinjack" made here. What really struck me, though, was the kids description for the video:

I dedicate this video to my Dad. He inspired me to pursue mathematics and science, while at the same time, to appreciate the arts. He is a great father.

Exactly what I hope my kids say about me someday. :)
Posted by otisgexperience at 12:55 PM No comments:

During house parties of the past, I've always thought it would be cool (and funny) to have random 80's music videos playing in the background. I once tried compiling YouTube videos (using SaveTube), but it was always too much work for something so cheesy. I have seen 80's music video DVD's at the store, but they never quite had the "random" selection I was hoping for.

My friends, today I made an incredible discovery.

Check out thegreat80s.com. You will find 80's culture, TV shows, and even classic video games that you can actually play.

Of course, there's also the crown jewel...
The random 80's music video player. This thing could keep you entertained throughout the workday! (Uhhh... I mean weekend.)
Rest easy, comrades. I've got you covered. 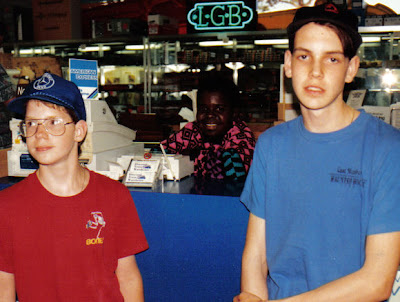 Otis G (on the right), circa late 80's, with Gary Coleman and my little brother! We were awesome. You can kinda see the "Limpies" logo on my hat, which was my trademark symbol throughout the 80's... seein' as how I didn't get laid until the 90's. :) 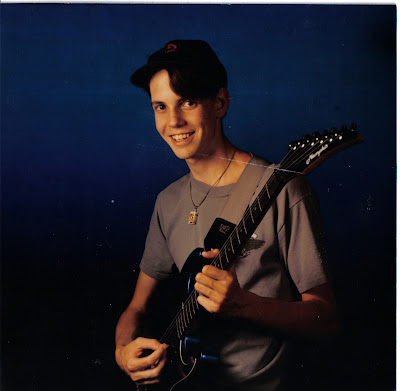 And speaking of my little brother, this one's for you:
Yeah, I know. I tend to get off track sometimes.
Posted by otisgexperience at 10:16 AM 2 comments:

Let Them Eat Cake, While I Eat Cheesecake!

Last summer, my friend's friend had a tree blow over during a windstorm. It kinda sucked, cause my friend's friend was out of town on vacation when it happened. Not only did it knock out her power, but my friend was worried about her having to deal with the mess when she came back. So, she asked if I could go over with a chainsaw to cut the thing up, and I was happy to do so.

My friend's friend was so appreciate when she came back, she ended up giving me a couple gift cards. One of them was for $50 at The Cheesecake Factory, which was kinda cool since I hadn't been to the new one in Coeur d'Alene. Unfortunately, unbeknowst to me, it had already closed down. Come to find out, the one in Spokane was gone as well. Not really knowing what else to do with it, I threw the gift card in a box with several others... and forgot about it.

Tonight, as I was paying some bills, I came across it again. I glanced at the back of it, and realized I could use it online. I was hoping that they maybe had some cool kitchen stuff, but quickly found that your only option... is to buy cheesecake! (Hmmm.) What the hell, I figured. Nothing like some fancy cheesecake to go with my Tuna Helper. 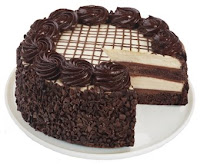 When the "shopping" screen came up, I was shocked to find that most of them were $40 to $50 apiece. Seemed pretty pricey, but whatever (didn't exactly have a lot of options). I picked out this delicious-looking chocolate number, and proceeded to the checkout screen. Little did I know, it costs around $25 to ship a cheesake. Grand total? Around $75. Yeah, no thanks.

I browsed a bit more, and found a smaller banana cheesecake for the bargain price of... $23. With shipping, it came to a measley $49.90.

So, in a couple days, I'll hopefully be getting the thing in the mail. And while the rest of the population is losing their jobs and wondering how to pay their bills, I'll be chowing down on $50 banana cheesecake.

Feel free to stop by for a piece, population. :)
Posted by otisgexperience at 2:43 AM 1 comment:

Now, like many of you out there, I do find myself occassionally perusing YouTube videos. Sometimes, though, I get tired of watching a bunch of crappy videos to find the good ones. I always thought it would be cool if there was a "America's Funniest Home Videos" show, specifically for internet videos. Without the lame host, of course.

My prayers have been answered. For anyone who hasn't heard of this yet, I proudly present... The Digg Reel.

Check out the latest episodes here.
Posted by otisgexperience at 12:30 PM No comments:

My daughter is a puzzle fanatic. She'll do the same "Hello Kitty" puzzle 5 times, in one sitting. I decided she could use a new one, so I took her to the game/puzzle store in the Valley mall yesterday. While she perused the Disney princess and Tinkerbell section, I considered buying a big-kid one for myself. 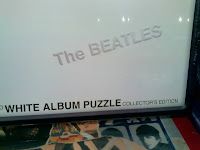 I found a three-dimensional globe puzzle, that was super cool. The $45 price tag was not incredibly cool. I looked at the 1000-2000 piece puzzles... and decided I was looking for an evening of fun, not 6 months of dedication. Then... I came across The Beatles album cover collection. Now, that could be kinda fun... until you realize... they put out this obscure little record called The White Album.

I can imagine the infomercial for this sucker:

"Just what you've been waiting for... The Beatles White Album... as a puzzle! Most puzzles have distinct colors, shapes, and lines, that are a joy to try and fit together. Not this one! Imagine the hours of family fun you'll have while you pluck completely white pieces out of a box full of completely white pieces, and wonder if you'll EVER find any that fit together!" 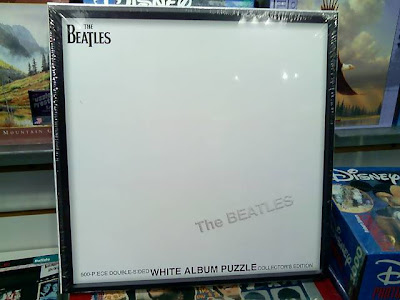 "Act now, supplies are limited. And... if you call in the next 5 minutes, we'll throw in the perfect compliment... Metallica's Black Album puzzle. You only have to pay the $6.95 shipping and handling!" 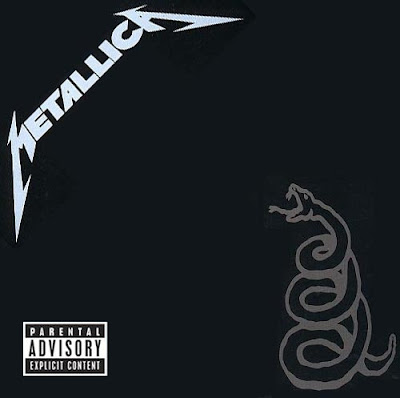 Of course, now, if I ever put out an album, I'll keep in mind it's future puzzle marketing potential. Maybe I'll make it completely blue... 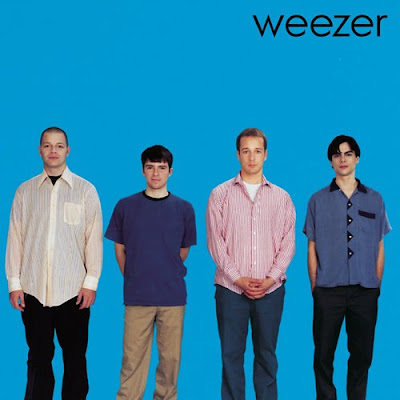 Yeah, I know, Weezer already did that. But mine will be very innovative... COMPLETELY blue. :)

Side note: I was just looking at the White Album puzzle photo, and realized it says "100-piece double sided". Does that mean the backs of the pieces are white, too? Phew. Wouldn't want it to be TOO easy.
Posted by otisgexperience at 11:58 AM 1 comment: