Getting Away From Julia

It was the exact phrase that I had been wanting to hear from him for years. Enough years that I had forgotten I wanted to hear it. 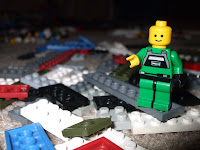 I loved Legos when I was a kid. I would ride my bike to the old Black Sheep next to Davis Donuts on 4th Street, and spend every penny of my paper route money on new sets. Once home, I would put them together, take them apart, and put them back together again. I would do it so many times, I wouldn't even need the instructions anymore. In fact, I hardly remember even playing with them once they were together. I was more fascinated by how they were built, and looking at them on the shelf.

From the time my son was born, I started buying him Legos. I wanted him to put them together, and cherish them as I did. Much to my dismay, toddlers are more into destruction than construction. Over time, the sets ended up taken apart in a storage bin, mixed up with all the sets from my childhood. We moved. He grew up a little, but still wasn't ready. We moved again. Not ready. His Mom and I got divorced. The Lego bin went into a storage unit, where it stayed for a year. I finally bought my own house, and the Legos surfaced once again. By this time, I had given up (or just plain forgotten) the notion of building the sets to display. Besides, after everything... I doubted the pieces would even all be there. 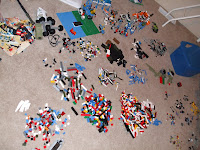 Before I knew it, my son turned eight. For his birthday, he ended up getting several Lego sets. After putting them together, he decided he didn't want them thrown back in the bin. It was a huge milestone for me. I immediately got him some under-his-bed storage bins, where he could keep the sets together.

This last summer, he got into watching Lego "stop-motion" videos on Youtube. It's the type of thing I would have loved doing as a kid... a way of bringing your Legos to life. One day, he asked if I would set up a camera for him so he could try it out. Here's what he put together, completely on his own: 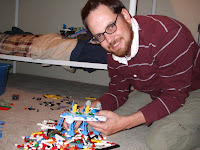 I was amazed. And super excited. While he was at his Mom's house, I decided to sort out that huge bin of Legos, so that he'd have all the sets to use for making more movies. I don't know how many hours I spent sorting those pieces out, but to be honest... it was really fun for me. Much to my surprise, even my old sets were still in intact. When he came over next, I loved the look on his face when he saw all those sets... new and old... assembled and ready, props to be used for whatever movie he wanted to make.

We worked together on the next one. Starting out, we really didn't have a story in mind. We just played together, and his five year-old sister helped out as well. Once together, we decided on a plot, and recorded the dialogue. Here's how it came out:


There's always a part of us that wants our kids to do the same things we did. Sadly, often times you see parents trying to force their kids into doing the same things they did. I've realized the best thing I can do for my kids is to expose them to as many things as possible, and encourage them in whatever they're interested in. But I will say that it sure is fun when our childhood worlds collide. :) 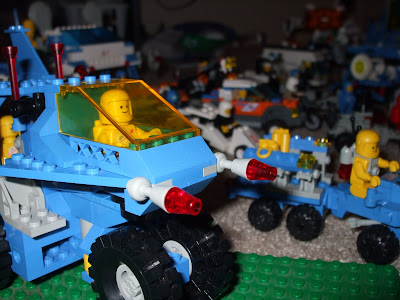 Posted by otisgexperience at 12:30 PM 2 comments: