I'm not much of a TV person. I would much rather watch movies that sitcoms. I think part of it is knowing that if I watch one episode, I might get sucked in and get stuck watching it every week - usually feeling like I should be doing something else. 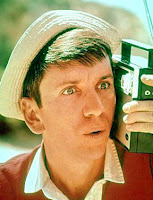 When the show "Lost" first came out, I constantly heard people at work talking about it. A bunch of people stuck on an island? Sounded lame. I had already burned out on Survivor - and didn't Gilligan kinda cover that in the 60's?

I ended up giving it a go, and like everyone else... found myself wanting to know what would happen next to those poor saps. The story itself kinda drove me nuts... but I dug the whole "sci-fi" aspect of it. I did like the episode where they found the Volkswagen full of beer and got it fired up: 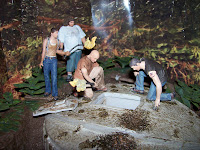 My favorite episode, though... the HATCH (click on the picture at left for a more detailed view). What a killer season ender. And then, the whole continuing saga of what happens in the hatch. I think that was the most brilliant part of the whole series.

I'm not sure what my deal is with clearance-priced pop-culture toys lately (see My Own Personal Elvis here), but I came across this baby in the music store at the Valley mall. Marked down from $29.99 to.... $11.99! I couldn't resist. It was just too damn cool.

Here's a miniature Jack, Locke, Kate, and Hurley peering down the chasm of what is the hatch. The detail is actually pretty good, for a crappy mall store diorama. There's a switch that makes the hatch hole light up (for extra dramatic effect!) It even came with a fake jungle photo background. What will I do with it? Hell if I know. Wait... I'm doing a blog about it.... that counts as something! 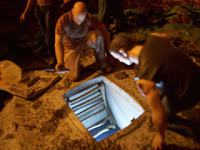 After the hatch blew up (on the show, not mine!), my interest in "Lost" mostly blew up with it. I started to realize something EXTREMELY annoying about the show - nothing ever seemed to get resolved. It had these incredibly dark, deep plots - that were never fully explained. They just seemed to continuously get deeper. (I felt the same way about the show "Alias", by the way). It started reminding me of Seinfeld, in how it was kind of a "show about nothing". Except, it wasn't in a funny way. It was in a jam-a-fork-in-your-eyeball frustrating way.

I heard someone talking about "Lost" at work yesterday. I didn't even know it was still on. Maybe I'll catch an episode in my "free" time (what's that?). I'm thinking they're probably... still on the island?
For the last episode of the series, they should find a 70 year-old Gilligan in the jungle. Now THAT would be something. :)
Posted by otisgexperience at 5:06 PM

I get so pissed at this stupid show. But I can't NOT watch it. I mean, what if they answer some of my biggest questions in the episode I miss? Besides - I AM going to figure this show's secret out before the rest of y'all. I am possibly that smart. :)