"Hey man, what are you doing for lunch tomorrow?" Coming from my hippy/granola/cubicle neighbor buddy O'Malley, that usually involves a trip to the organic pet food store. Or a burrito from Taco Bell. Not this time.
"Why do you ask?", I asked.
"Dude! Senorita Makita is going to be at Spokane Power Tool tomorrow. Let's go check it out!"
Senorita Makita? It sounded too goofy to be true. So, I promptly googled "Senorita Makita"... and there she was. In all her tool-belt strapping glory. And in all fairness, there was a Miss Makita as well. Good to know Makita is an equal-opportunity employer.
I don't normally get excited about such things. But, it was funny seeing O'Malley so excited about it. I said "Yeah, for sure! I'm in!" The fact that they were serving free lunch helped. 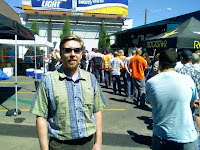 The next day around noon, we jumped in his Subaru Outback and headed downtown. As soon as we approached Spokane Power Tool, I knew that Senorita Makita must be a big deal. There were hundreds of contractors, laborers, and... uh.... even a couple of "public agency" vehicles parked there. After we parked and got in line, there were... uh... TWO... office guys. Us. Regardless, we were welcomed into the mix.
For a half hour, we stood in line amidst guys looking at tools. Guys talking cool. Guys looking cool. After all, a half hour is not much time to prepare yourself for something as mind-blowing as Senorita Makita. After much patience and self restraint, there she was. I expected her to be posing gorgeously, with high heels and cameras flashing. Instead, she was positioned under an EZ-Up canopy, sitting at a table. She frantically signed posters of herself. 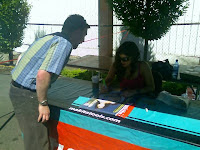 O'Malley was quite smitten. "What's your name?", he asked. It never occured to me that Senorita Makita may not be her given name. O'Malley is one smooth character, I'll give him that. She told us her name. I don't remember what it was. I was too busy thinking about what it would be like to be the focus of attention among hundreds of people... and knowing that every one of them wants to have sex with you. Weird. 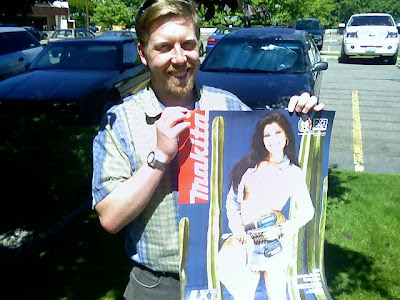 Posted by otisgexperience at 10:07 PM

Wow... "O'Malley" does look very happy with his poster... I suppose he couldn't exactly hang it up in his office or bring it home. Maybe he put it on the ceiling of his car so he can lean back and bask in the glory ;b

Wow.. sounds like a quite a lunch date. Where is your poster picture?

You guys have the best dates. I want to go on one with you. It would be the greatest time. I think everyone should get to see the poster for real.

Nice to meet you!

I don't blame you for forgetting my name- it's not the easiest to remember- Krizia Bajos- that's a doozie.

I'll keep in mind to be a tad bit more glamorous in the future ;-)

ps. Spokane was absolutely gorgeous and possibly one of my favorite spots during the tour. Thank you!