Buying gas sucks.
Cars are expensive in the first place. When you really think about it, a new car is equivalent to most people's yearly income.
And then there's insurance. What's up with that? It's kinda like giving the neighbor kid money every month, just in case you need him to mow your lawn one day.
Then they breakdown. We won't even get into that.
On top of it all, you gotta keep the damn tank full to keep it going. It's no wonder people pay such close attention to gas prices. Sometimes TOO close attention, I think. It drives me nuts how my Mom will drive across town to save 10 cents a gallon. That's a total savings of about 1 dollar in her car. Yippee.
I've never really got that excited about paying for gas. You gotta do it, right? I don't think the powers-that-be have a bitch gauge out, measuring the complaints from people, and adjusting prices accordingly. Sorry, people.
Granted, I never had to really worry about buying gas. Even when I bought my full-size Chevy pickup, I only had about a mile to drive to work. I filled it up about once a month. I hafta admit, though, I did ride my bike to work occasionally - with kid trailer in tow. But it wasn't about saving gas, it was about exercise.
Times changed.
I took a new job in Washington, with a commute of about 22 miles one way. I suddenly found myself spending 300-400 dollars a month on gas. Plus, I hated the fact that I was putting so many miles on my nice truck. I came very close to bitching about it. Instead, I did something about it.
Say hello to Otis G Mobile #2. 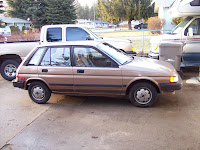 It's an '87 Toyota Tercel. I bought it from a grandma through a guy I know from work for $1,5oo. She only drove it to the doctor and to the store, so in over 20 years she only managed to put 60,000 miles on it. It's boxy. It's not exactly sporty. It doesn't even have a cassette player; AM/FM radio only (that occasionally works). Weirdest part? I love it. I guess that's a sign of getting old, when economy is more important than style.
So, I figure I'm saving at least $200 a month driving it. It'll pay for itself in a few months, but more importantly - I'm not putting miles on my precious truck. It's actually a bit of a treat when I drive my truck now, as it should be.


I think it is a cute little car!

Dude, I had that car (1989 model)! It was my first new car! I had the 2-door one, blue-silver. Awesome car. No stereo. No air conditioning. Great gas mileage. Big-time chick magnet. I ran it all over the country, then into the ground. Can't beat a Toyota.